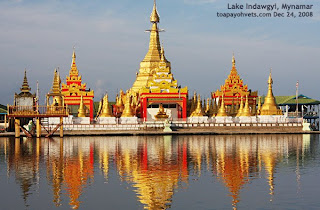 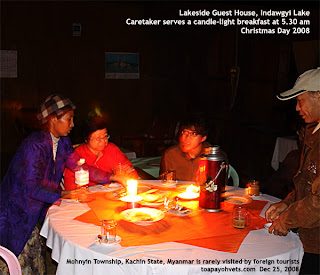 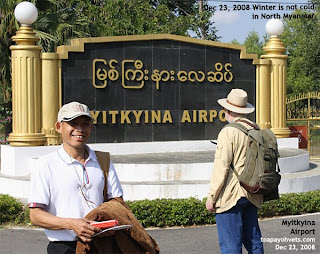 A hundred sparkling stars dotted the black sky on Christmas eve in this village by Lake Indawgyi. It took 7 hours of car travel from Myitkyina. It was around 5 p.m. The only accommodation for foreign tourist was the military guest house. There were only two foreign guests - my family and a French man. This village is seldom visited by foreign tourists other than Buddhist pilgrims.

Yet there were many churches as I passed the over 20 villages on the way to Lake Indawgyi. The Christian missionaries were dedicated many years ago and brought education and care to the poor villagers.

I expected freezing cold winter days and nights in December. But the days were bright and sunny and cool. The nights were cold but not freezing.

"No electricity except from 6 pm to 8 pm" the guest house caretaker informed us. This was OK with me and the two sons who were now grown up. My sons had served national service for two years and were used to hardship. Except for the mother. It was just not her type of tour.

Dinner would be by candle light if taken after 8 pm. No hot water for bathing. The shower was not working.

I enjoyed this "back to nature" environment. Black skies with hundreds of stars in a village with no lights. Complete blackness. As there was an unhappy Singapore mother, I asked the guide whether this lack of electricity was the norm. The guide asked the care-taker.

"For 20,000 kyats (S$20.00) or a full house of 15 guests, I would have turned on the power generator to provide electricity." Even the Yangon travel agent had not known about this situation.

But it was the most memorable breakfast my two sons would ever have. A bona fide candlelit breakfast with no lighting outside. I don't know whether they appreciate the tour to visit and understand more about the ordinary Myanmar farmers and villagers. Definitely they would not forget the bona fide candlelit breakfast and mummy's complaints. Such tours are not for Singaporeans who want efficiency and comfort of first world countries!
Posted by Photography by Sing Kong Yuen at 3:16 PM