A "Dangerous" Expedition to Myanmar


Mission of exploratory trip
To find out whether starting up a tourism business in Myanmar will be a viable business in Singapore. Photographs are needed to document this trip.


Summary
"Is Myanmar a dangerous country to visit?" Jason asked his mum. So little is known of Myanmar in Singapore except for sensational political reports in the English language newspapers and some famous travel books. Very few Singaporean residents tour Myanmar and few travel agencies offer advertise such tours. Yet, Europeans especially Germans, people from Thailand and China do visit Myanmar in large numbers. The former love the gentle culture and land. The latter two go for the Buddhism cultures and pagodas. My short exploratory expedition in October 2008 showed that Myanmar is a safe country and has lots of culture and views to offer the Singaporeans and photographers. There is a prospect of starting up a niche tour to Myanmar in collaboration with the Myanmarese travel agencies. 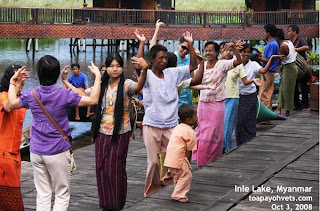 Benefits
1. An unforgettable expedition for city folks who have only been to well developed countries like Europe and Australia.
2. City folks who wants to connect with Nature.
3. Develop of an understanding of the hard life of farmers in a country of 55 million people.
4. Numerous opportunities for photographers who love culture and nature.
5. History and culture tour. An appreciation of the colonial history and Buddhism as there are several thousands of pagodas.
6. Appreciation of being alive and being able to do the following in a smog-free environment in the countryside - seeing beautiful sunset on Lake Inle, breathing the fresh misty air of the Golden Rock mountains, touching the clear lake waters and foliage of Lake Inle, seeing golden rice fields, small farm holdings of ducks, pigs. See rubber and other fruit trees and flowers and the development of a big country.

2. Insects like small spiders in hotel bed in the Golden Island Cottages Hotel at Lake Inle may upset tourists who are not used to having insects in their office or house. Dead and live moths lying on slippery marble floors of Golden Rock Pagodas may upset such tourists too. Surprisingly, few mosquitoes were present in the places visited.

3. Only one thunderstorm was encountered in this visit. It was on the way up the mountains to see the Golden Rock pagoda. It was a most memorable trip.

4. Bumpy rides with little leg room in large lorries up the Golden Rock pagoda hotel. Pot-holed roads on the way to Yangon from Bago.

5. Pitch-darkness 1 am to 5 am in Mount View Hotel, near the Golden Rock Pagoda during the off peak season - to prevent transformer from being "hit" by lightning. No written notice in the hotel room. A torch-light was available but the guests were not informed. So, it was "total blindness" in the bedroom - can't see a cm in front when guests wake up at 1 am to 5 am. This can cause quite a fright for Singaporeans who are always used to having no blackouts. 2 electrical power failures during dinner in Sedona Mandalay Hotel lasted less than 5 seconds. Quite a surprise for Singaporeans not used to blackouts.

6. Machine-gun rattling of rain on the tin roof of Mount View Hotel near Golden Rock Pagoda overnight due to the thunderstorm. Drum beats in Sedona Manadalay Hotel's nightclub heard on 3rd floor.

7. A need to change the Singaporean mindset of efficiency and being productive as the lifestyle in the countryside is simpler.

8.1 No room internet access in some hotels. Singaporean teenagers and youths addicted to online gaming remember this deficiency but are usually tired out to do any surfing.

8.2 Lorries with tight benches rounding up the mountain road to the Golden Rock can be "traumatic" to the backs of Singaporeans not used to such bumpy rides. Similarly, pot-holed roads and bumpy rides can be either a joy or a suffering for Singaporeans.

8.3 Heat in Mandalay is a common complaint from Singaporeans used to air conditioning.


Failure of mission
As only one camera is taken for this trip, the mission nearly failed when:

1. Camera lens cover slightly cracked on steps as I fell on alighting from the boat after visiting a water-located pagoda.
2. Camera - Lakeside waves of Lake Inle could have overturned the boat. My camera was not kept in any waterproof bag and therefore could be ruined. It would not be able to buy a good replacement Canon EOS 40 camera in the countryside.
3. Camera - Thunderstorm and rain on the way up to the Golden Rock pagoda carried by the locals on a stretcher for around 30 minutes uphill at 7 pm could have ruined the camera too.
4. Camera - Lack of telephoto lens as I used the standard lens provided for by the manufactuer, missing out great shots.

Conclusion
Myanmar is a safe country with lots of things to do and see for Singaporeans. Prices are relatively low compared to a similar visit to Perth and cities of Western Australia. The rainy season is from April to October but prices are much cheaper. The peak tourist season is from November to April and hotel accommodation can be much higher. There is a niche market for Singaporean-Myanmarese tour and travel business, esp. for personalised vacation tours if you, the reader, see a glass of water as half full rather than half empty. 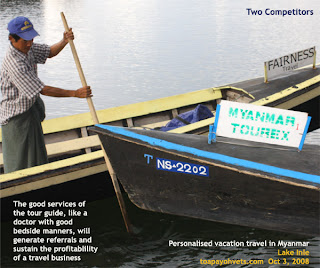 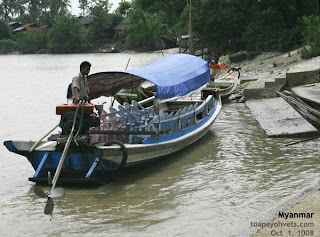 While alighting from the boat after a visit to a water-located pagoda on Day 1, I stepped on a step provided. As I had strained my left foot in Singapore for some time, I could not balance myself and fell holding onto my camera with my left hand. My camera lens cover hit the concrete steps while I fell sideways. It was surprising that I did not fall into the river. The camera was all right but I had a very painful ankle.

This was the first day. Would this mission be aborted? "See a doctor," Tour Guide 2 advised. "No need," I said. But I was worse than a lame race horse and there were a few hundred miles of trekking to do. I wrote down the names of drugs and asked Tour Guide 2 to get me some NSAID pain-killers. Tour Guide 1 got a masseur for me. A dark man with a gigantic neck and large hands, looking like the Incredible Hulk in the latest movie version. He could easily crush me anytime as he massaged my legs for half an hour.

The massage with lots of oil left was excellent as the masseur knew which muscles of both legs to loosen. Unfortunately, my left foot was still very painful in the evening when I returned to the hotel. There was no time to wait for the massage to work. I took two tablets of NSAID Voltaren pain killers given by Tour Guide 2. Pain reduced 90% overnight and was fit for duty. With a slight limp. 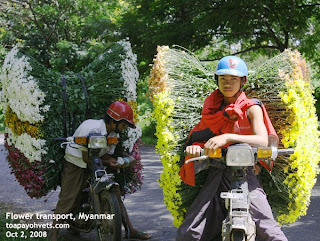 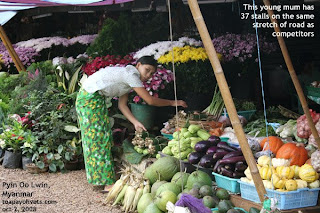 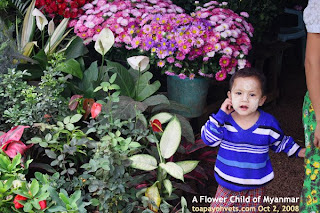 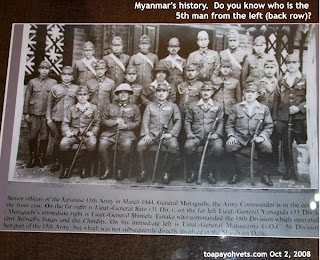 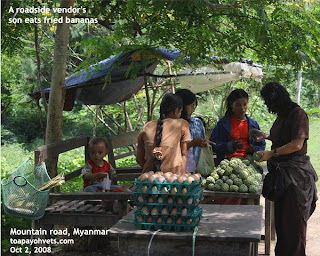 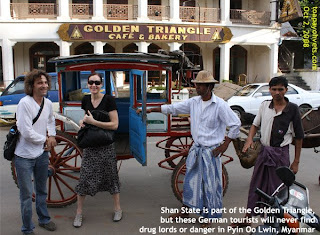 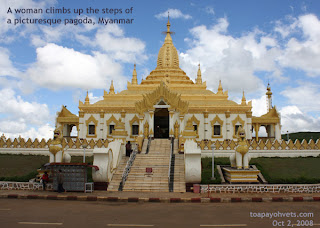 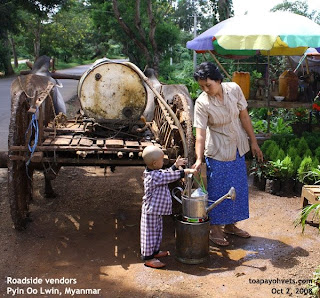 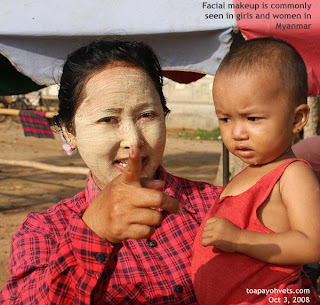 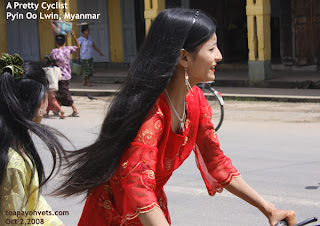 In this trip, I tried to take pictures to show the culture and life-style of the people of Myanmar.

For example, I asked the driver to stop as I saw two flower transport boys resting on the roadside. It was now or never as most of them were in motion, taking flowers to the wholesaler or somewhere. These two boys probably could not afford further their education and had to work to support the family.

Many pictures are in this blog which is still a draft as at November 10, 2008.
Posted by Photography by Sing Kong Yuen at 12:48 PM

Fantastic post !!!All pictures are very good and colorful. My bad luck; that why I was missing the tour. I hope that again it will be arrange on 2009-2010.I was very excited while I was reading this blog.